EHS Recognized Nationally for its Innovation During Pandemic 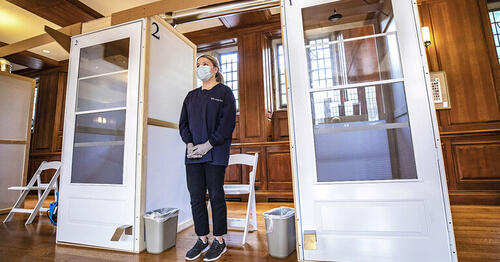 In October 2021, Ben Fontes led a virtual presentation at The American Biological Safety Association’s (ABSA) 64th annual Biosafety and Biosecurity Conference on some of Yale Environmental Health and Safety’s (EHS) response measures during the height of the COVID-19 pandemic. Immediately following his presentation, ABSA representatives asked Fontes to submit articles for publication consideration on two of EHS’s most notable accomplishments.

It is also currently reviewing EHS’s article on design and implementation of an on-site field hospital at the Lanman Center to house COVID-19 positive patients.

Fontes is the lead author on both papers.

As mass testing for COVID-19 ramped up at the beginning of the pandemic, it quickly became clear that there was a need to protect both the people being tested as well as workers in the test site from potential exposures when people removed their masks during testing.

“While some places around the country went outside for testing, Yale wanted to remain indoors,” Fontes said. “There were many available places, but they also had limited ventilation capacity and presented very unique challenges.”

The initial idea came by looking at photopods, essentially pop-up plastic bubbles that are used to keep photographers protected from the weather while shooting. While it was determined the photopods ultimately would not serve Yale’s needs, it got the group thinking about individual containment units, with the goal of having testing pods available in summer of 2020 for the return of students to campus.

EHS worked with Yale Health and the School of Engineering & Applied Science to come up with a design that included an open back, but the unit could not sufficiently contain aerosols. Facilities staff then came in and combined the photopod design with the open back design to create a rigid structure, similar to a phone booth. The 3x3x7 Yale Facilities design unit was completely enclosed and had a storm door for entry and exit. A foot handle was placed at the bottom of the door to allow for hands-free entry and exit. The storm door could be pushed open to leave with an arm or other body part and had a sliding screen and window, which provided a way to modify the airflow into each test booth. Each door was equipped with a spring to serve as a self-closing mechanism. HEPA filtered exhaust fans or exhaust ductwork (if exhausting to the outside) were placed on the top of the booth, based on the room configuration.

The units, and other similar devices created by Yale EHS staff, were called short-term use biocontainment bubbles or STUBB-Ys (the Y represents Yale) and there were over 100 of them scattered around campus testing facilities, labs, Yale Autopsy Service, and clinics at the height of the pandemic.

EHS staff, led by Safety Advisors Tessa Landgraf and Neil Velasquez, performed the initial tests of the units at the test centers and continue to coordinate weekly testing to ensure they offer the proper ventilation and protection.

“These units were put together using simple mechanisms used in a different manner to provide engineering controls and protection,” Fontes said. “This publication could be shared internationally and the design could be translatable to other parts of the world.”

EHS was also involved in creating a portable aerosol containment unit for off-site locations or places that could not fit a test booth STUBB-Y. Safety Advisor Jeremy Stoddard was the lead designer for the portable unit and worked with Safety Advisor Ryan Cirillo and Safety Advisor Technician Steve Cranford to create a HEPA filtered cone that can be placed near the mouth of the person being tested to extract aerosols as they remove their mask. These portable units have been used in various locations including in the Yale Health Center. Other STUBB-Y’s were built for clinics, the BSL-3 lab, Yale Autopsy Service, and the Yale Pathology COVID-19 testing lab.

When the university decided to turn the Lanman Center into a field hospital, one of the biggest challenges it faced was protecting the workers caring for those patients.

“If you are going to have 75 COVID-positive patients without their masks on, you have to assume that the people helping them are going to be contaminated from head to toe,” Fontes said. “You have to make sure they aren’t bringing any contaminants outside of the facility.”

EHS partnered with Yale Health, Facilities, and Emergency Management in the initial setup of the field hospital, which was intended to care for members of the Yale community who were moderately ill as to not overwhelm Yale New Haven Hospital. One of the goals was to ensure a safe directional flow of COVID-19 patients in and out of the building while also thinking about the staff who would deliver clean items and supplies.

“So many departments came together to share their expertise and creativity and their unwavering commitment to keep Yale as safe as possible throughout the pandemic,” Fontes said. “I think it was reflected in the fact that there were lower transmission rates at Yale as compared to other universities around the country during the early waves of the pandemic.” Fontes also credited EHS colleague Steve Murdzia and Facilities, Yale Health, and Emergency Management colleagues for always finding a way to engineer safety into every aspect of the design.

Ultimately, Yale was able to manage the surge of positive cases in alternate isolation housing and the Lanman Center was not needed as a field hospital. However, the preparation served the university well and many of the protective measures were put in place as the Lanman Center was eventually used to house COVID clinical trials, as a test center, and as a mass vaccination site.

EHS partnered with several other Yale departments and would like to thank the following staff for their efforts: Steve Murdzia and Anthony D’Abramo (EHS), Anthony Kosior, John-Paulo Fernandes and staff (Yale Facilities), George Hines (Yale Emergency Management), and Nanci Fortgang (Yale Health). This endeavor was a true partnership and could not have been successful without the help of so many dedicated staff members.