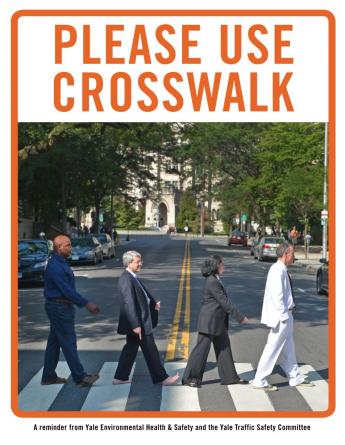 keep thousands of motorists, pedestrians and bicyclists safe while navigating the streets of New Haven each day doesn’t happen without strong partnerships and collaboration. Dr. Kirsten Bechtel, chair of Yale’s Traffic Safety Committee, described this particular partnership as “demonstrating the best of the town-gown relationship.”

“This wouldn’t work without the city’s relationship with the University,” said Bechtel, an associate professor of pediatrics and emergency medicine. “We need each other to promote different things we’re working on and to work out logistics. If you don’t have that collaboration and you don’t have people who enjoy working together, it’s just not going to be successful.”

Yale’s Traffic Safety Committee recently celebrated its five-year anniversary, looking back on past accomplishments while looking forward to greater improvements.

The Committee was formed in 2011 following a recommendation to Bruce Alexander, Yale’s Vice President for New Haven and State Affairs and Campus Development, who embraced the idea and asked Yale’s Office of Environmental Health and Safety to lead the committee. This followed a 2009 report by the Yale College Council and the New Haven Safe Streets Coalition regarding traffic safety at Yale.

The release of the 2009 report was motivated by the death of 27-year-old Mila Rainof MED ’08, who was struck and killed while crossing the intersection of South Frontage and York Streets in April 2008. Just two months later, 11-year-old Gabrielle Alexis Lee was killed while crossing the street when a driver ran a red light at the intersection of Whalley Avenue at Davis Street. Bechtel had connections to both tragedies. She did research with Rainof’s roommate and her daughter was one of Lee’s classmates. When it came time to form Yale’s Traffic Safety Committee, President Peter Salovey, then the University’s provost, called on Bechtel to serve as the chair.

The Committee immediately got to work bringing together a diverse group of Yale faculty and staff, members of both the Yale and New Haven police departments and representatives from the City of New Haven.

After the inaugural meeting in 2011, a subcommittee was formed to survey intersections on campus to rate their safety for all users based on their current infrastructure, the number of motor vehicle crashes reported in the vicinity and the number of votes they received on SeeClickFix, a web tool that allows citizens to report non-emergency neighborhood issues.

It also sent a survey to members of the Yale community asking them to rank the intersections they felt were most dangerous. The survey garnered about 2,000 responses.

Doug Hausladen ’04, New Haven’s director of transportation and a past member of Yale’s Traffic Safety Committee, said the Committee has been a valuable resource in helping to identify areas for improvement.

“It’s really a best practice in a collaborative environment that tackles the three avenues of enforcement, education and engineering angles” he said. “We’ve seen the Committee work through the right channels in the University to get things done for the public in the right way. It also helps the city understand the traffic safety priorities from the University’s perspective.”

The Committee has utilized “Complete Streets,” a transportation program adopted by the city in 2010, to submit applications for changes to make specific crosswalks safer. The “Complete Streets” mission is to “to prioritize walkability, inter-modal transit, traffic calming and pedestrian-based urban economic development.”

An application for the crosswalk at Temple and Wall Streets includes raised bump-outs to shorten the crossing distance and improve the visibility of waiting pedestrians has been approved along with a new crosswalk to be installed outside the Yale School of Drama at 222 York Street. That project calls for a raised crosswalk with a rectangular rapid flash beacon (RRFB) on each side of the street, which will flash LEDs on pedestrian crossing signage upon command from a push button. There will be six-foot bump outs on each side of the street and the crossing will be elevated to the height of the sidewalk so cars will need to ramp up and down, which will also help control speed. Both projects are expected to break ground in the near future.

Along with physical changes to increase safety, the Committee has focused heavily on education. Bicycle Safety Training courses, run through Yale Environmental Health and Safety, were created and now run monthly. More than 1,000 members of the Yale Community have attended the training, led by EHS Safety Advisor Doug Noble, and received a free bike helmet.

Campaigns around pedestrian safety including proper use of crosswalks, pledging not to text while walking and sharing bike paths have also helped to spread the message that safety is everyone’s responsibility. The Committee has enlisted the services of Jason Shelowitz, a well-known graphic artist from New York City, to create images around pedestrian and bicycle safety including a take on the Beatles’ Abbey Road album cover featuring prominent University staff to promote the safe use of crosswalks.

“It has really grown since the beginning,” Bechtel said of the Committee and its outreach efforts. “I think we’re more aware of it in our daily lives and people have taken these messages back to their own jobs and communities. That’s been pretty impressive.”

The Committee meets roughly six times per year. If you have any suggestions or comments on traffic safety at Yale or would like to attend a meeting, please contact EHS at ehs@yale.edu or 203-785-3550.